State Medicaid programs have expanded home and community-based services (HCBS). This article compares trends and variations in state policies for Medicaid HCBS programs in 2005 and 2010. State limitations on financial eligibility criteria and service benefits have remained stable. Although the use of consumer direction, independent providers, and family care providers has increased, some states do not have these options. The increased adoption of state cost control policies have led to large increases in persons on waiver wait lists.

In response to a new Federal initiative to improve the U.S. long-term services and supports (LTSS) system, this commentary discusses an array of policies and practices that could potentially improve LTSS provision by shifting from institutional to community-based services, increasing equity across populations, offering consumers more choice and control, improving conditions for workers and caregivers, and promoting improved consumer-level outcomes. 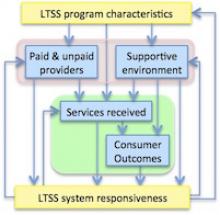 Several ongoing efforts address the problem of measuring quality in home- and community-based services (HCBS), but there is no consensus as to what aspects of HCBS are essential to improve quality, compare service delivery models, settings, or providers, or ensure equity in service provision. In this brief, we propose a conceptual framework for quality and outcome measurement in long-term services and supports.

June 2014 marked the 15th anniversary of the United States Supreme Court’s landmark civil rights decision in Olmstead v. L.C., finding that the unjustified institutionalization of people with disabilities is illegal discrimination. While many cases are resolved without involving the courts, during the last 15 years, the lower courts have had the opportunity to apply Olmstead in a number of contexts, resulting in decisions furthering community integration for people with disabilities.

On June 27, 2013, the Senate passed a comprehensive immigration reform bill with strong bipartisan support: The Border Security, Economic Opportunity, and Immigration Modernization Act of 2013 (S.744). In the House, leadership has outlined principles for reform and considered several piecemeal bills in relevant committees. However, it remains uncertain whether legislation will move forward in this Congress and, if so, what path it may take.

©2020 The Regents of the University of California